So, before getting into thoughts about past and future, I want to discuss the present and a project that has been, well, an absolute pleasure.

Been working on a novel for a while called "Alternatives" - about a guy who keeps finding himself shunted from alternate earth to alternate earth.  I took one short scene from the novel and turned it into a short film.  We shot the film in one day on February 29th.  The auditions, rehearsal, and the shoot itself got me out of myself and some incredibly awful things that were going on at the time including:
My furnace dying - lot of money to replace and
One of my two lovely (now) 11 year old Bengal Cats got really ill and was misdiagnosed with cancer.  She had something else, is fine now, but had to spend a couple of days in the cat hospital (what a sweetheart - after over a half hour of the vet and nurses getting her settled in a huge cage with a luxurious cat couch - and being hooked up to two intravenouses and having a cone around her little head - I was led into the hospital area to see her - she jumped up and literally leaped into my arms - the nurse said "All she needed to see was dad to get the adrenaline going" - well, that and the fact that she was really high on some medicine she was given so she probably hallucinated and saw me as the god of cats).  Obviously, I love my cats.  They're, well, they're my kids.  And they talk so much I wouldn't be surprised if they started spouting Yiddish.

But enough KVETCHING (which I do so well, wouldn't you say?)

Came the day we shot - an oasis in a time of constant crises.  Normally, film shoots make me exhausted - this one invigorated me. Denise Gibbs (a one time student and close friend) helped a huge amount with both casting and production (there's a reason she's down as Co-Producer).  Richard Williams shot the film beautifully (we actually finished early - a first for me) and is also a fantastic editor.  And the actors were incredible (that one of them turned out to be one of the best writers I've ever met in a long long time was a bonus). Everyone on the production was fantastic, and my friend Wade showing up on set early in the morning to help out was just the icing on the cake.  I haven't worked with such a professional group of people since, well "Since '45" (pun intended - that's the name of the documentary I did).  One of the best times I've ever had and the resulting film is, I think, the best thing I've done since I did Since '45 so many years ago. 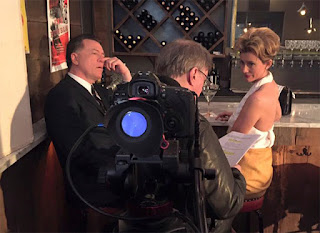 Music is being done by the great musician Pete Kennedy.  Just great - only wished I had used one line which a person said about me recently, talking about me living in the Pacific Northwest - "Your a Jew in the land of Vikings!"  Would've fit perfectly at one point in the film. If you ever see the film, you'll know exactly the place it would go. 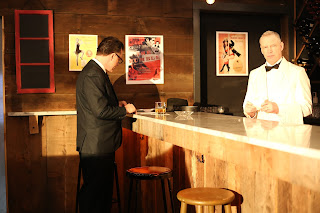 There's Andy McCone, our lead actor, looking over the script. He's essentially playing a taller, better looking version of myself.  And he got my whining down pat. Vic Brady is our bar tender.  The posters of films and Broadway shows that never existed in our reality were made by Eric Manley (digital f/x being done by Wade Chitwood). 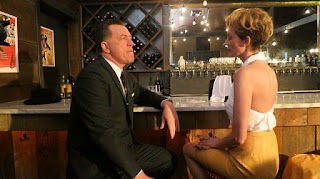 Above are our two leads, Andy and the ridiculously multi-talented Erika Walter, waiting for "Action" to be called.  Our other actors, Eric Smiley and Vic Brady were also great.  And Eric, who played the Sleazy Guy (we never did give him a name) also happened to be a hair stylist - BONUS!
A wonderful experience!  Wish there were a lot more experiences like this one.  More later.

Posted by Michael D. Korolenko at 10:43 AM No comments:

Well, it's been four years since my first and only blog.  I've decided to start a stream of consciousness blog.  The site itself needs a ton of work and updating.  I've got another site devoted to my film Since '45 at since45.com
But this will just be my own thoughts.

Been thinking about both past and future lately so I'm going to blog about both in the coming weeks.  See ya soon.
Oh - and here's a beautiful poster for our last Rocket Man movie - Rocket Man and The Aerial Fortress done by Wade Chitwood. 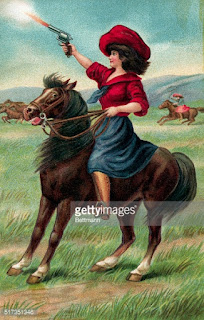 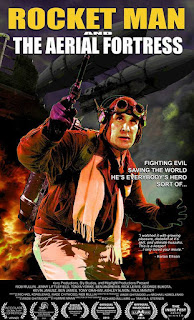 I'm working on finishing up another film:  Alternatives.  More a little later.  Thanks.
Posted by Michael D. Korolenko at 10:56 PM No comments: